Showing posts from October, 2019
Show All

- October 26, 2019
In May 2013 I started to feel an unfamiliar sensation in my chest. It was only subtle but it was particularly noticeable after exercise and was followed by a dry, irritating cough. The only way I could describe it was that it felt as though there were feathers in my chest when I inhaled. I just assumed I had a cough and expected it to go away after a while. I was wrong and over the next few weeks I felt much worse. I was waking up with this feathery sensation every morning and struggling with fever, extreme tiredness, neck pain, night sweats and weight loss. I remember meeting with friends on the beach with our children and feeling so shattered I could barely keep my eyes open. I was living on paracetamol and taking naps in my car during my lunch break to survive my shifts. I wasn't getting better so I saw my GP, who suspected a viral infection and signed me off work for a week. Despite the rest, I was only getting worse so I visited him again. He listened to my chest and told me I
4 comments
Read more 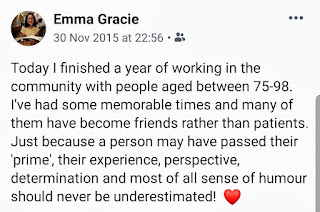 My job as a Parish Nurse was extremely varied. In a week I could change dressings, take a patient to an appointment, arrange a cream tea or even take a group of people to the theatre. I visited Flossie most days and would often discover that she didn't like the dressings the district nurse had put on and had replaced them instead with tissue and string! I used to despair at this and made an agreement with the community nurses that I was allowed to use their dressing supply to redress Flossie's legs again.   Flossie seemed to grow as fond of me as I had her and entrusted me with many jobs, from pulling out her 'whiskers' or calling me when her shopping was delivered so I could put it away, to times when she was more vulnerable and needed more help. My manager would often tell me not to do things that weren't in my job remit but I felt that by helping Flossie with things that took me a very short time, I could help prevent accidents and more serious issues. For exam
Post a Comment
Read more

- October 05, 2019
In my first week of parish nursing I was asked to visit Phillip. I hadn't been told much about him other than that he used to attend the church. I arrived and let myself in the back door as I'd been instructed. I'm always amazed by how trusting some older people are; I could've been anyone wandering about his house. After sticking my head in nearly every room I found him upstairs in bed just finishing his lunch. Phillip was only in his late seventies but had issues with his circulation, which meant that at times it was too painful to walk. Today was one of those days, which was why he had his legs up in bed. It was clear that he was once a strong man; he was still solid and broad shouldered as he sat in his pyjamas. After I introduced myself he told me that he'd been on the television the night before. Not knowing Phillip yet I wasn't quite sure if he was mentally sound or not. It was quite a strange thing to say upon meeting someone for the first time, I th
1 comment
Read more
More posts

Blue Girl
They say that nursing is a vocation and, when I take time to reflect on all the experiences it has brought me over twenty years, I suppose this really is true. I began writing initially as a way of recording the most memorable people I have cared for as I didn't want to forget them. However, as I have progressed and spoken about what I'm doing it seems that more people than just me are interested in hearing these stories. So here they will be, a collection of funny, sad and perhaps shocking accounts of patients of all ages and from all walks of life. I will of course never use the real names of patients.

Blue Girl: Nursing Beyond the Ward

Now available in paperback and on Kindle