- October 28, 2021
The Covid vaccine and masks. Subjects I am spoken to about on a daily basis at work and out of it. I have even been tagged on Instagram in debates about whether it should be mandatory for healthcare workers to be vaccinated or not. My opinion is that the vaccine should be a personal choice and I don't think any government should have the power to impose medication of any sort on a person. My opinion on masks is that unless you have a truly valid medical reason for not wearing one, what possible harm can it do to put one on when required? The point of them is to stop the spread from you, not to you, and I think wearing one shows that you respect those around you. Choosing not to simply because you don't like it isn't an excuse. What is important when deciding whether to have the vaccine or not, regardless of your profession, is that your sources of information are trustworthy and reliable. I'm sure anti-vaxxers will step in here and tell me that the government are not providing this kind of information. And I will have to leave you to decide whether you believe that or not but I would say medical research is the best place to educate yourself to enable you to make an informed choice.
I fully respect the decision not to have the vaccine as long as it's an informed one. I didn't immediately leap to the decision to have it myself since it's such a new vaccine. It wasn't until I had completed the training to administer it and come to understand the science behind it that I felt comfortable enough to have it. I also appreciate that deciding to have it yourself is one thing but that making the choice to give it to your children is another entirely. I spoke to my children who are 15 and 12 and allowed them to be part of the decision too. They have both opted to go for it but I appreciate it's a tough one.
You've probably seen recently that celebrities are joining in the debate. Jennifer Aniston has actually cut off her friends who won't have the vaccine or reveal if they've been vaccinated or not. Her argument is that she wants to know if she comes into contact with someone who may have the virus so that she can avoid passing it on to others more vulnerable. She said "It's tricky because everyone is entitled to their own opinion - but a lot of opinions don't feel based on anything except fear or propaganda."
And this is what horrifies me -  the amount of status updates, memes and arguments on Facebook and other social media platforms apparently proving that the vaccine is harmful or ineffective or a conspiracy. And by the way, if you're writing a meme hoping to convince people of anything, please check your spelling! The amount I've seen written incoherently is hilarious.
Nicki Minaj recently claimed that the vaccine can make men impotent. This even caused England's chief medical officer Chris Whitty to step in and speak about her claim. He said that Nicki "should be ashamed" after she tweeted an unfounded story about a man who'd been given the vaccine and then apparently became impotent. During a news conference at Downing Street he said "There are a number of myths that fly around, some of which are just clearly ridiculous and some of which are clearly designed just to scare. That happens to be one of them." He also said that there are "people that go around trying to discourage other people from taking a vaccine which could be life-saving or prevent them from having life-changing injuries to themselves".
I'm not saying you must or mustn't get the vaccine, the choice is yours. But please make sure your sources are accurate and reliable, not from some anti-vaxxer hothead with no real medical knowledge splashing their unsubstantiated opinions all over social media.
I'll leave you with my favourite tweet on the subject of masks which I feel demonstrates my point perfectly: 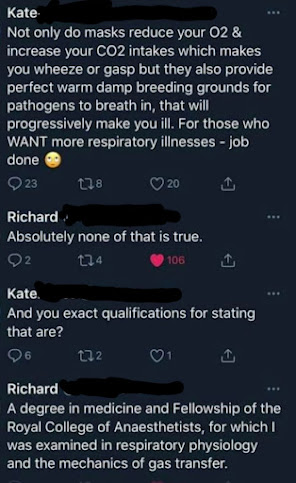 Popular posts from this blog

- May 02, 2021
County Lines. Maybe you’ve heard of this, maybe not. But if you  are a parent or have  children in your life that you care about, it is vi tal that you learn about it and,  most importantly ,  help to educate these kids by talking about it.   I’d heard of it and thought I had a decent understanding of the subject until recently when my son had, what the police described as, 'a close shave'. I was  aware that kids on bikes were targeted for  drug running, I was aware that kids who travel in from London by train are a target and I was aware that adults are approaching kids offeri ng to pay for food in return of  a  favour . These things are happening and if you live pr etty much anywhere in England  it’s most likely happening in your town. But here’s what I didn’t know and what I feel a responsibility to share. That the people coercing and grooming our kids may well be an adult in a quiet part of the high street, they may well be an adult hanging around the station or chicken sho
Read more

- August 20, 2021
Firstly, I feel I need to make some kind of disclaimer to make it clear that what I've written here is in no way intended to offend or upset anyone. I've been sitting on this blog for a couple of months now as the topic is a sensitive one and I've been unsure how well it will be received. It may seem that each paragraph swings between opposing viewpoints and that's because I have no idea what the right outcome should be. I’m not here to give answers as I don’t have them but I have had many conversations over the last few months that I feel could raise useful and important discussions. What I have written is based on personal experiences, my own observations and those made by colleagues and other parents. During my time as a school nurse it has been impossible to ignore how many children seem to be suffering with mental health issues. Stress, anxiety and depression are rife among all year groups and there are days when I wonder if there is a child in existence who is gro
Read more

- March 19, 2020
Let's be clear on one thing. Selfish people who are only concerned with their own needs are dicks. Panic buyers are only concerned with their own needs and therefore panic buyers are dicks. Don't panic buy. In fact, don't panic at all. This outbreak is of course very concerning and by no means am I suggesting that we carry on as we please ignoring vital information. But let's all only pay attention to the correct information. As soon as this situation began I've been urging people not to take notice of the sensationalist media that we are subjected to on so many platforms these days and listen only to what is being issued by the government/NHS. Their advice is clear, sensible and very easily followed. Stay calm, do what is advised and don't ever read the Daily Mail. Nowhere have we been told that the best way to act is to disregard everyone else, ramming fellow customers out the way with our trolleys, so that we can buy 32 packets of paracetamol and 225 loo
Read more

Blue Girl
They say that nursing is a vocation and, when I take time to reflect on all the experiences it has brought me over twenty years, I suppose this really is true. I began writing initially as a way of recording the most memorable people I have cared for as I didn't want to forget them. However, as I have progressed and spoken about what I'm doing it seems that more people than just me are interested in hearing these stories. So here they will be, a collection of funny, sad and perhaps shocking accounts of patients of all ages and from all walks of life. I will of course never use the real names of patients.

Blue Girl: Nursing Beyond the Ward

Now available in paperback and on Kindle